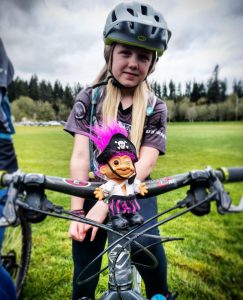 The Key Pen Pirates mountain bike club adopted the Pirate name and Jolly Roger as part of the Key Pen's maritime tradition and identity.  Often romanticized - The Pirates of the Caribbean, Treasure Island, and famously Mark Twain's The Adventures of Tom Sawyer - becoming a pirate teases the imagination of kids and adults! jump to the quotes ›

And like Tom Sawyer: the romantic life of a pirate offers youth the ultimate chance for daring adventure in the outdoors and freedom from life's more tedious responsibilities (and today's electronics).  While technically not at sea or sailing, the Key Pen Pirates embodies the romantic spirit of a pirate when mountain biking.

By definition, a pirate is a bandit at sea and they're characterized (often mis-characterized) as brutal seafaring thieves.  However, the history of pirates is more complicated, and beginning in 500BC pirating was honored and respected by the Greeks.  Not all pirates were criminals - some pirates "privateers" were sanctioned by governments, while others were supported by early American colonies. And so on... the history is fascinating.

At times pirates certainly were brutal and vicious, but they also lived during a nasty, brutal and vicious age in history. Many pirates chose the life because piracy was better than the alternatives to the cruelty and injustice in that age's societies on land. For example, it wasn't unusual for merchant crewmen to join pirate crews. This is because "honest" merchant and military sailors were underpaid, sometimes forced into service, beaten at the slightest provocation and lived in abominable conditions.

Why be a pirate?

And the Jolly Roger? Contrary to popular belief of pirate violence, pirates often treated prisoners decently to encourage ships to surrender without a barbarous fight. The black skull-and-crossbones Jolly Roger flag was flown as a warning to surrender.

A collection of our favorite Pirate and Seafaring quotes:

"Life’s pretty good, and why wouldn’t it be? I’m a pirate, after all." Johnny Depp

"It's funny that pirates were always going around searching for treasure, and they never realized that the real treasure was the fond memories they were creating." Jack Handey 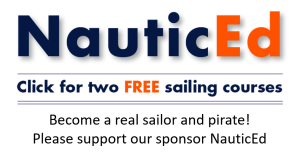 "There comes a time in most men’s lives where they feel the need to raise the Black Flag." Anonymous

"Now and then we had a hope that if we lived and were good, God would permit us to be pirates." Mark Twain, Life on the Mississippi

“Not all treasure is silver and gold.” Pirates of the Caribbean

"Where there is a sea there are pirates." Greek Proverb

"The rougher the seas, the smoother we sail. Ahoy! "

"Damnation seize my soul if I give you quarters, or take any from you." Blackbeard

“It’s more fun to be a pirate than to join the navy.” Steve Jobs

"The Code is more like guidelines, really." Pirates of the Carribbean

"Even pirates, before they attack another ship, hoist a black flag." Bela Kiraly

"When a pirate grows rich enough, they make him a prince." George R R Martin

"There is more treasure in books than in all the pirate's loot on Treasure Island." Walt Disney

"If the pirate with a scarf had been more poetically minded he'd have thought that her eyes were like a thousand emeralds, glittering in a far-off pirate treasure chest. But he wasn't, so he just thought that she had really really green eyes, a bit like seaweed." Gideon Defoe

"Merchant and pirate were for a long period one and the same person. Even today mercantile morality is really nothing but a refinement of piratical morality." Friedrich Nietzsche

"I think pirates, like astronauts, particularly for a boy, are always kind of worth thinking about." Daniel Handler

"A friend can betray you, but an enemy will always stay the same."

"The rougher the seas, the smoother we sail. Ahoy!"

"Yarrrr! there be ony two ranks of leader amongst us pirates! Captain and if your really notorious then it’s Cap’n!"

"The average man will bristle if you say his father was dishonest, but he will brag a little if he discovers that his great- grandfather was a pirate."