Pirates are going all in for the 2023 riding season

Mountain biking is an exciting sport that affords riders the opportunity to get outside and explore trails, develop skills, build confidence, make friends and have FUN riding bikes. The mission of the Key Pen Pirates youth mountain biking club is to foster life skills development through cycling and create a foundation for lifelong cycling enjoyment.

Our focus is on skills development, teamwork, outdoor recreation, youth empowerment and respect for the community and the environment. Go to our Program page for more information »

Lots more.... Our first year riding and racing was FANTASTIC with young riders from Key Peninsula, Gig Harbor and Tacoma. The community, local and parent support for expanding local youth riding at 360 has been extraordinary. The growth of the young riders as a new team and club has been inspirational.

Contact us for more information and updates on upcoming plans. You can contact us here, or email at info@keypenmtb.org.

Key Pen Parks created the hugely popular biking course and now the KP has a “home team” that’s made 360 Trails their own. 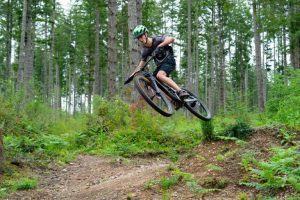 A successful first season comes to an end in June for the new Key Peninsula Pirates mountain biking team. The group was established in January by head coach, parent and former member of the Coast Guard Coree Collins, who has been mountain biking on trails since 2006.

“I love mountain biking, so I was hopeful,” Collins said. “It’s super fun. It’s good for mental health and stress management. And getting outdoors is so important.”

Key Pen Parks has hosted Washington Student Cycling League races at 360 Trails for six years, but this was the first year the KP has had an active local team with local kids practicing and racing together.

The composite team currently has 11 riders ranging from sixth to 12th grade, girls and boys. “The kids have been very supportive of each other,” Collins said. “It’s pretty amazing. We’re not putting pressure on the kids to race. What we’re doing is building community with the kids. We’re working on the fun and the skills so that if they want to race, or if they want to start getting more competitive, it’s their choice. The league’s mission is to empower them.”